My wife took me the other day to see Sophia Coppola’s latest movie, The Bling Ring. As everyone knows by now, it depicts – in a partly fictionalized and, according to the director, non-judgmental way, the daring exploits of a group of real high-school students (several young women and one young man) from the LA suburbs. Coming from well-off or outright rich families, a few years ago they achieved instant fame as they basked in streams of reflected Hollywood glitter. More specifically, they had walked into the lavish homes of celebrity actors and self-impersonators around Hollywood Hills while the proud owners were on business trips; and walked away carrying designer clothes and accessories valued at around 3 million dollars. Surprise, surprise – the gang were arrested after some of them were captured on surveillance cameras, and somebody (perhaps one of the many schoolmates who had heard them brag about their exploits and seen them flaunt many of the stolen goods) tipped off the police.
Read more »
Posted by Ivelin Sardamov at 1:12 PM

A life lesson from Nelson Mandela

Once in a while something striking and tremendously significant happens, and the major news outlets are utterly and totally preoccupied with it, neglecting scores of less interesting topic. To Al Jazeera’s credit, the last time this happened – with the birth of the royal baby the other day – they did make a valiant effort to address some issues which would undoubtedly evoke less burning interest – like Nelson Mandela’s legacy. A few days ago I accidentally caught two minutes from a conversation between a blond South African woman and a dark-haired man, both middle-aged and apparently some sort of experts or pundits. They were discussing Mandela as he seemed to be approaching the point when it is time for him to depart peacefully from the world he fought so hard to make a better place for everyone. 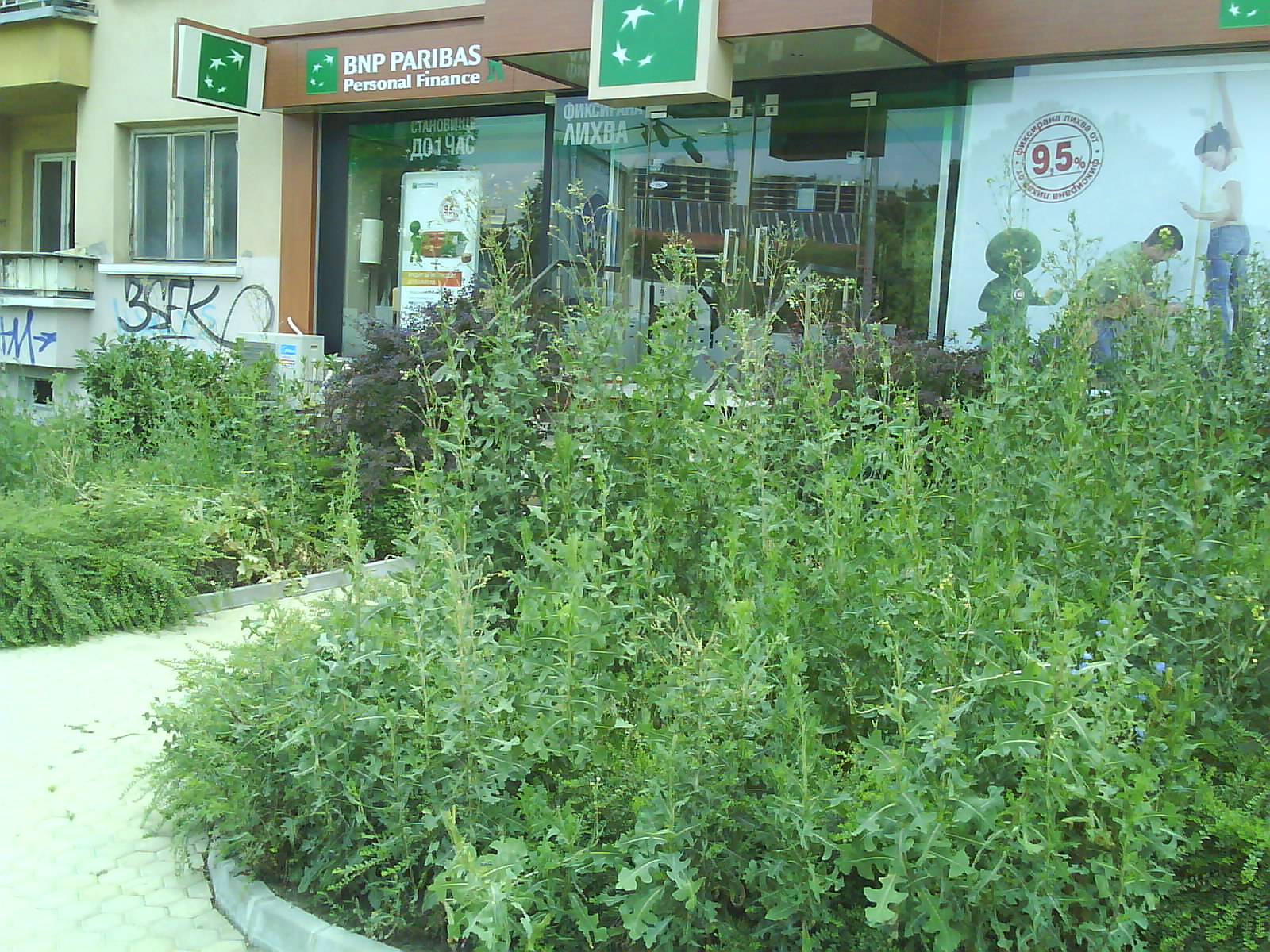 This is a small bank office on a major street in a well-off part of Sofia. The vigorous plants in front are, indeed, weeds. They were not cut off by anyone hired by the municipality, and nobody seems to care. This could, perhaps, be seen as a metaphor for a deeper collective action problem in Bulgarian society – which, I am afraid, won’t be solved by removing from power the current “political class.”

Posted by Ivelin Sardamov at 7:31 AM

This is the title of a piece by Isaac Abel on The Atlantic  web site. In the competition for clicks, The Atlantic seems to have done quite well by providing a steady stream of such provocative material. The article itself offers a mix of disarming self-revelation and quasi-scientific cliché (the latter reminiscent of Philip Zimbardo’s much discussed TED talk and accompanying ebook on the descent of young men). Abel’s chief concern, though, seems to be the shame internet porn addiction still seems to carry – a somewhat refreshing worry in our anything-goes day and age.
Read more »
Posted by Ivelin Sardamov at 10:20 AM

Boston Magazine has a profile of psychology professor Lisa Barrett. She is billed as the most prominent psychologist who has sought to challenge Paul Ekman’s long-standing “finding” that people around the world identify (and perhaps experience) a few “basic emotions” in roughly the same way. Like Barrett, I have always found Ekman’s theory of the universality of basic human emotions (which has propelled him into academic and consulting stardom) implausible and “cartoonish.” My intuition is that individuals in different cultures tend to have different patterns of emotional reactivity and concepts. To Barrett, though, this view would also be too constraining.
Read more »
Posted by Ivelin Sardamov at 11:58 PM

Noble lies (kind of) for the 21st century?

Sometimes you read a piece by an intellectual you admire, and you feel like you have uncovered a hidden vice in someone you considered a soul mate. This is more or less how I felt when I came upon Christine Rosen’s Commentary column “In Praise of Sheryl Sandberg.” What does Rosen praise Mark Zuckerberg’s second-in-command for? For recognizing that women have mostly themselves to blame for their collective inability to climb the corporate ladder, so they should stop whining about male oppression and crippling stereotypes (even if Sandberg herself recognizes that some stereotypes do persist).
Read more »
Posted by Ivelin Sardamov at 2:56 PM

The NYT carried recently a decent article on the continuing protests against the Socialist-backed government in Bulgaria (“After Political Appointment in Bulgaria, Rage Boils Over”). Of course, it had the obligatory quotes from participants and analysts. One participant stated the obvious: “If you read the biography of Peevski, [the political appointee from the title, who at 21 was once made head of Bulgaria’s biggest port, and a few weeks ago at 32 was put in charge of Bulgaria’s state security agency] he personifies all the problems of Bulgaria” – summed up by an anti-corruption expert as “state capture by oligarchs.” But Haralan Alexandrov, a social anthropologists who has labored tirelessly to legitimize Bulgaria’s noveau riche elite and to present them as victims of largely unjustified public bias, offered a different theory. In his view, an important factor explaining the public antipathy against Peevski is his physical resemblance to the caricatured “exploiter capitalists” presented once in communist-era propaganda.
Read more »
Posted by Ivelin Sardamov at 9:01 AM